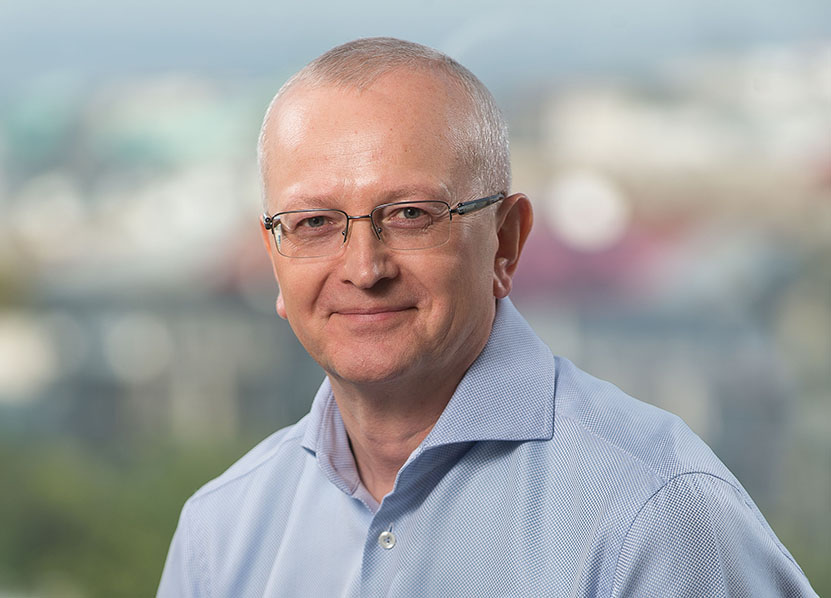 [1]
In the contest ‘Business Communities Award PRESSzvanie 2014’ business journalists voted for the best press offices of Ukraine. As the partners of the contest, Group DF and MMR were presenting awards to the winners. It was the contest experience that triggered the idea of MMR taking this interview with Igor Kirilyuk, Head of Corporate Communications at Group DF, member of the PRESSzvanie Supervisory Board, about cooperation between PR-specialists and journalists, specialists’ migration form one profession to the other and the press office work in nowadays changing media landscape.

Igor, what tasks did you set by supporting the journalist contest PRESSzvanie and pressZNANIE nomination in particular where the best press office was to be chosen?

By supporting PRESSzvanie contest we intended to unite our efforts in promoting professional development of mass media and press offices. If we take the pressZNANIE nomination, which we supported, here I’m sure that it is of paramount importance for Ukrainian companies. According to the European Association of Communication Directors (EACD), media relations or working with mass media constitutes not more that 37% of press office working hours. It’s very likely that the contest results will make some of its participants review their time management practices. This nomination is an acid test that helps a press-office to evaluate how efficient it cooperates with mass media. Because the voting system is transparent and the results are open to everybody. Thus, the nominees in an award category may discover how journalists evaluated them in line with all the criteria, as well as draw their own conclusions as to what has to be improved.

PRESSzvanie is sometimes criticized for celebrating the exactly same journalists from year to year. Is it the weakness of this contest or does it mean that no new bright stars are rising on the national journalistic horizon?

I believe that it’s quite natural that some journalists keep taking top awards, but just because they have a definite advantage – the accumulated experience. Moreover, I’ve been following this contest since 2008 and from this spot I can say that new names do arise from time to time what cannot but be a matter of joy. Of course we would like to see more names and some stimulating and development-driven healthy competition between them. I would say that everybody would significantly benefit if the experienced journalists could share their knowledge and experience with younger colleagues more.

Perhaps you remember your last journalist discovery, a new interesting name? Who was it?

It’s too difficult to single out somebody. There are so many professionals. For example, I have indeed rediscovered Sevgil Musayeva during her days at Forbes. I like Vlad Golovin’s style when he writes on entrepreneurship. To tell you the truth, there are so many young talented people passionate about their work. Just have a look at the contest award winners.

How do you build and maintain your relations with key journalists who wright on the themes related to Group DF?

Firstly, we identify the key media for us … I would like to explain here right away, that we do everything possible in order not to offend or neglect any media or journalist. We are trying to build relations with media based on partnership and trust. How do we contribute? First of all, it’s a high quality content we provide. You know, it’s not always easy to explain in a simple-to-understand way information about difficult business processes, chemical production or logistics. We are trying to support it with examples and data. We are doing everything possible from our side to be dynamic in our response.

How often do you initiate contact with journalists on your own accord? What form do you use?

Meetings for coffee, lunch or dinner… No, to be frank, the communication never stops. If we mean the requests, then while preparing the issue we get call-backs reminding us about deadlines… We fully understand that it’s not us alone, who’s racing against the clock. Meanwhile we are also the ones to initiate meetings and topics for discussion to tell more about the projects that are quite difficult to cramp it into a release. Well, and of course we use opportunities like informal socialising at such events like ‘PRESSzvanie’. Because there are real and interesting people that stand behind the posts and titles.

Do you have any feed-back standards for incoming requests from journalists?

There is an internal policy according to which we try to respond to media requests in 24 hours and we’re doing our best to follow it. We are definitely happy when we get a bit more time to prepare the answer and when the stipulated deadline in a request is in a few days’ time. But now when media is more often moves to the online format, we are more likely than not to move the deadline to an earlier time. Yes, sometimes it’s difficult to make it considering that we are a big group of companies with the enterprises all around the country and in certain cases there is a need for additional time to gather and internally coordinate our information. But nevertheless we always try to give a quick reply.

How were you influenced by the massive shutdown of business periodicals that we’d seen in Ukraine since the beginning of this year? What do you reckon will happen with the media market next?

Definitely it was sad to find out that such media like ‘Kommersant’ and ‘Investgazeta’ were shut down. Those were literally extraordinary star teams. But nevertheless, either shutdown of business periodicals, or their conversion into on-line format as well as cutting down circulation and frequency – these all constitute a trend that is not uniquely Ukrainian, but can be observed in Europe just as well.

The number of daily periodicals in Ukraine has dropped by 50% in 5 years’ time: from 61 daily to 31. The newspaper circulation in France for the last four years decreased by one-third. For example, a popular French daily La Tribune turned weekly. Newspaper revenues dropped in Germany as well, that is why many media are now charging fees for accessing their websites. Dozens of periodicals in Spain and Greece ceased to exist.

The reason for such contraction of printed media markets is a decreasing number of readers who are all going online instead, the cutting of advertising budgets as well as EU cancellation of subsidies for printed media. Meanwhile we can also see the business model of media changing. The Ukrainian market forges ahead: the new periodicals appear on the market, including those of brand new formats. Journalists launch their own projects. This stands for market development and professional growth of the journalists. As I see it, the Ukrainian media market will see even more transformations in future. Daily press will keep taking the online stand, but at the same time I do hope that weekly and monthly analytical periodicals will stay, and the role of a dynamic instant news messenger will be taken by online media.

I hate to hurt anybody’s feelings, but journalism and public relations – these are two completely different professions. Yes indeed, it’s a common thing for a company to hire journalists to be press-officers, counting on their contacts with fellow journalists, knowledge of mass media entrails and their ability to write fast and well. And by the way they undeniably do it very well. But corporate reputation management is something much more comprehensive and difficult with media relations being just one, though unquestionably important, part of it. And after all, excellent writing skills will be not quite enough to make it work. That is exactly why in the past those with the most vast experience from top managers and psychologists to engineers and those of a humanities bent, would become very good PR managers. This was before they started to teach it at universities. Now our new educated and well-trained specialists are our white hope. And there is no joking about it.

Will this year see Days of Ukraine in the United Kingdom? How are you planning to develop the cultural diplomacy line?

Cultural diplomacy retains its status of the strategic corporate responsibility priority for Group DF. Right now it’s difficult to say when next Days of Ukraine will take place as it depends on many factors, including the development of the situation in the country.

What other large-scale events do you support? Please do be critical: do you manage to achieve all your goals in those cooperation efforts?

Group DF financially supported a number of milestone projects. The biggest of them all is, of course the aforementioned three-day cultural festival the Days of Ukraine in the United Kingdom. Our goal was to demonstrate modern Ukraine to the European community in London through its culture, which in turn facilitated the development of British-Ukrainian relations.

For us, as a representative of a large Ukrainian business, the economic development of our country is of paramount importance. That is why Group DF supported the World Economic Forum (WEF) initiative and became one of the sponsors to develop the Development Scenarios for Ukraine. One more project jointly supported by us together with Expert-Ukraine is a Corporate Social Responsibility Conference ”Business Corporate Responsibility towards the Country”. Annually we also support Mendeleev International School Chemistry Olympiad and other projects.

If you want something done right, do it yourself: so to avoid criticism you just have to either organize your own events or work jointly with the organizers on the concept of an event, its detailed agenda, the choice of themes and speakers, paying undivided attention to the detail. The bottom line is: you have to control the process. Because the devil is in the detail, isn’t it? From the presentation format to the logo placing and company profile. If such is the case I’d rather get my hands dirty with work rather than shift responsibility to other shoulders.